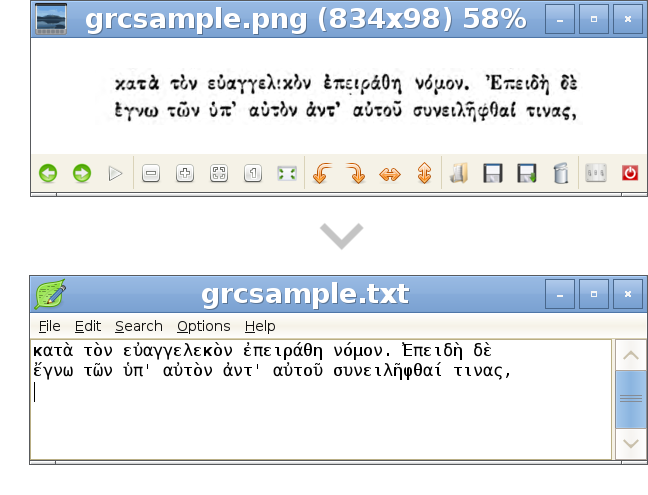 It works with Windows, OS X, Linux and Android, and works on personal computers, mobile devices, and large server clusters.

All of the code used to generate and test the Ancient Greek OCR training data is free software released under the Apache License 2.0.

There are several old repositories which are kept around in case they are useful to people, but have been superceded by the above repositories.

git clone https://ancientgreekocr.org/grc.git
The final training process, which used files generated by the grctraining repository. All of this functionality is now included in the grctraining repository.
git clone https://ancientgreekocr.org/grctestfodder.git
Ancient Greek page scans and ground truth text for testing OCR accuracy (far fewer than is now included in the grcground repository above).

For comments, bugs, criticisms, code, help, or anything else, contact Nick White at ancientgreekocr@njw.name.

This project was made possible in part by the Institute of Museum and Library Services, LG0611032611; the National Endowment for the Humanities: Exploring the human endeavor; and the Perseus Digital Library Project, as well as the ERC funded Living Poets Project. The Tesseract OCR engine makes this all possible, doing all of the hard work behind the scenes.

Lace is a project publishing high quality OCR on scans of Ancient Greek from archive.org.